Report on Single Handed Races from Jon HarveyDay one of the 2018 Lymington River Scow Championships looked blessed by conditions most sailors dream of, a fine breeze from the southwest and plenty of sunshine, however as competition commenced banks of fog rolled over Hurst Spit dropping the temperature markedly and leaving many crews wishing they'd worn more than a T-shirt and spray top. Despite the meteorological obfuscation Race Officer Robin Dent got proceedings underway pretty promptly.

In the single handed fleet Robbie Claridge immediately set the pace, as he was to do in all three of Saturdays races, he was followed home in race one by John Chaundy and Jon Harvey, in race two by Eric Williams and John Chaundy, and in race three by Jon Harvey and Eric Williams, so overnight Robbie led the field comfortably while a single point separated Messrs Chaundy, Harvey, and Williams for the next three places.

Sunday presented a new challenge for the Race Officer, a light South Easterly breeze which progressively veered to the south west as the start time approached, nonetheless Robin Dent once again got proceedings away promptly. The lighter conditions clearly favoured Jon Harvey who led from Robbie Claridge at the windward mark, and notwithstanding slight confusion about when and where the race was finishing these positions held. Behind them a fair tussle developed on the downwind leg against the tide with David Carslaw coming out on top for third. The final race started in an even lighter breeze and staying the correct side of the start line against a building tide proved challenging. In the event Eric Williams pulled off a fine port start from the pin end just clearing Jon Harvey. When tacks were traded it was Jon Harvey who popped out in front and this remained the order through to the finish. Robbie Claridge recovered from an uncharacteristic start for third.

Totting up the results Robbie Claridge took the championships for the second year running with 5 points, in second place Jon Harvey on 7 points, and in third Eric Williams with 12 points.

On a lovely morning, 17 double handers set sail at Keyhaven, just before the start an eerie sea fog rolled in but everyone pressed on. Race 1 Chris and Grace Cecil Wright’s “Smartie” were on fine form leading Sarah Richards and Harry West in “Pooh Sticks” however they were passed downwind by Rory and Alex Paton’s “Wizard”.

Race two, the tide had started to turn and with the wind building a highly competitive start ensued, several boats taking penalties. “Smartie” powered away to win from Sarah and Leo Gosling’s “Oui” with Chloe Martin and Maria Claridge sailing “Kai” into 3rd.

Race 3 brought fresh hiking conditions Jo and Freya Hutchinson’s “Jemima” stormed into an early lead although they were passed by “Wizard” they held off “Oui” for 2nd place. The teams returned to the shore and the excellent hospitality of the KYC.

Sunday was very sunny and hot, luckily the sea-breeze appeared earlier than normal. Another hotly contested start-line in which several boats had to return having been OCS. Early leaders Ollie Tait and Alice Wood’s “Whimsey” were passed on the second lap by “Oui” and Molly and Claire Bridge’s “Birthday Girl”.

In a building ebb tide and less wind, it was all to play for in the final race. “Wizard” secured an early lead and despite a strong challenge from “Kai” and “Jemima” with some difficult mark rounding’s went on to win. Overall a special weekend very well managed by the host Club and the LRSCA class association 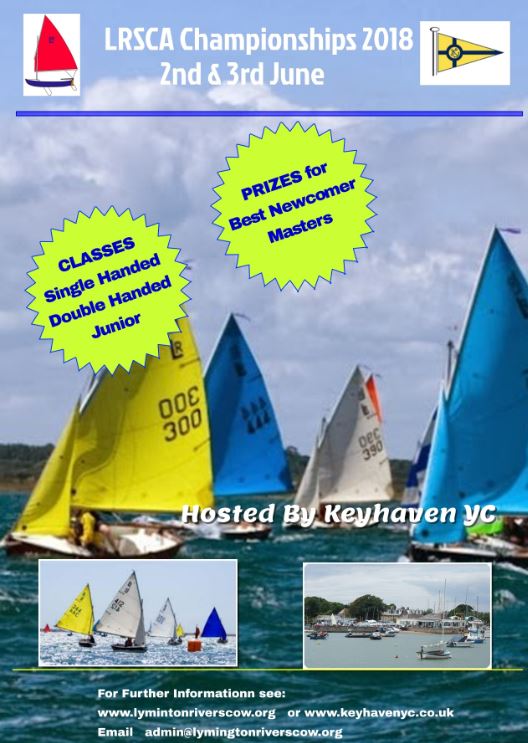