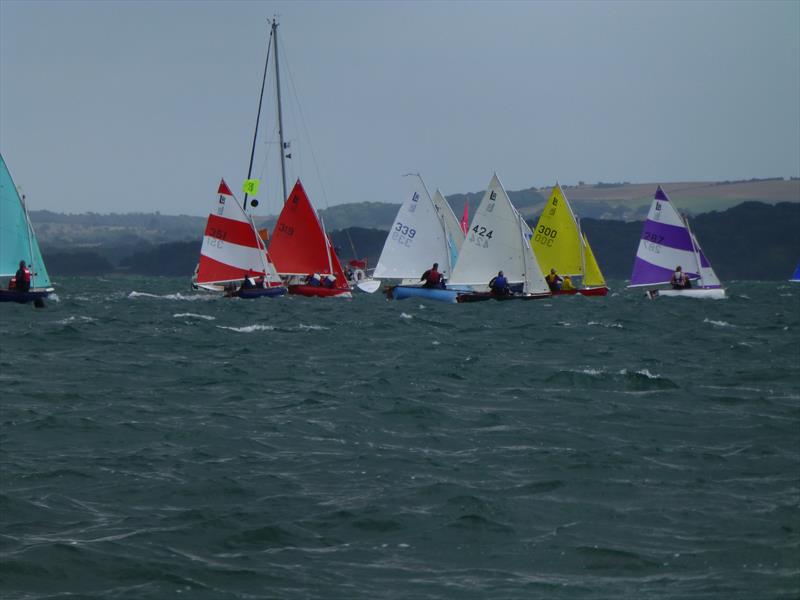 The western Solent was a wash of colour last weekend as Lymington Town Sailing Club hosted the Lymington River Scow National Championships. Forty boats turned out for the event which attracted sailors of all ages. On both days a traditional triangle sausage course was sailed with the boats sailing through the finish gate on each round to enable the Race Officer to shorten the course if required.

The championships started in varied conditions with race 1 getting underway with a moderate breeze. The competitors were in 3 fleets and in true Lymington style competition was fierce between all the boats.

Race 1 passed off with few incidents. By the start of Race 2 the wind had freshened to some 18 knots and a few competitors called it a day and returned to the club.

After a number of boats capsizing, which committed the support crews, it was decided to abandon the racing during race 2 on safety grounds, enabling the competitors to return to the club for the traditional Championship Tea, followed by the Championship Dinner.

Sunday started with the boats being launched in blustery conditions, only to be greeted with a light wind by the time they had got to the end of the river. The wind fluctuated during the morning and increased to a reasonable 12-14 knots in the afternoon. The support RIBs were joined by a few spectator RIBs looking on. Again the sailing was highly competitive especially in the Junior Fleet where sailors as young as 8 years old were racing.

The sight of these little boats battling it out with skill and precision clearly intrigued a few racing yachts as they decided to take a closer look and sailed through the course on their way to the Fastnet Rock! One in particular seemed to have mistaken the Solent for a slalom run as its helm skilfully weaved in and out of a number of Scows. Despite being a little daunting for the Juniors, no harm was done and the racing continued.

Thanks must go to the race team and support crews as well as to the slipway teams for their slick work in ensuring all boats were recovered with their correct trolleys.

The first Newcomer trophy was awarded to Cy Grisley in Second Wind.

Report and Photos in Yachts & Yachting